Posts : 63
Coinage : 96
Renown : 0
Join date : 2010-07-17
Types about RP, which will be based on Dragon Ball Z IN A DIFFERENT DIMENSION!!, where the dragonballs NO LONGER exist on earth, only on planets Namekian Guardians have migrated to like i dunno a Mass Effect planet like Illium or some where far away from earth, Planet Vegeta was destroyed but 40% of the population heeded Bardocks warning about Freeza and moved and Migrated off world, some in there hundreds other in there thousands. The Devil has 4 sons (in order of age youngest first - Hades, Pluto, Trigor and Lucien) and earth has Tech which makes Robo-Cop and Halo look like Sperm cells.Also to get a dragonball you must go through a test set by Namekian Guardians which range from Hunting a rare flower..and the chances of finding it are 1 - 100000000000 -_- to defeating the guardian who goes Slug or Cooler on you

Side note - BTW you cannot be a son of Trigor, Lucien or the Devil those spots are taken, also im using parts of a forum im on which is about DBZ, and please do not spam us with Sayains...also Halfbreed will Occur, Like Half Saiyan/Demon, Half human/demon, Half Namekian/Android etc etc (OFF LIMIT Race HALF angel/Demon) also weird mixs like half Saiyan/Namkian if you science guys know how to make one

Transformations; in reason, you cant become super saiyan if your a 10 year old who has never had a fight and whose mum and dad are human, or has never had a vegeta moment, and pleaseno one say you are born a legendary super saiyan UNLESS YOU HAVE A COOL BACKSTORY FOR IT!! 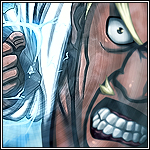 Please keep RP ideas/sign-ups for other RPs in the regular RP section.

What about just one late addition pretty please with A big cherry on top...ill even give you a black rose *gives Inari*